Time in Alaska Time Zone of the USA | AT Zone Map

Alaska Time Zone (AT) is one of nine time zones observed in the United States of America. As well as Hawaii-Aleutian Time Zone it is used in states beyond the contiguous U.S.

What is the time zone in Alaska?

Because of the large territory of Alaska, this state is located in two time zones at once. Most of the state is situated within Alaska Time Zone (AT), where no other US states belong to.

Hawaii-Aleutian Time is observed only on the western Aleutian Islands. For that reason it is one hour behind the remainder of the state.

For clarity, we suggest you take a look at the map of the Alaska Time Zone: 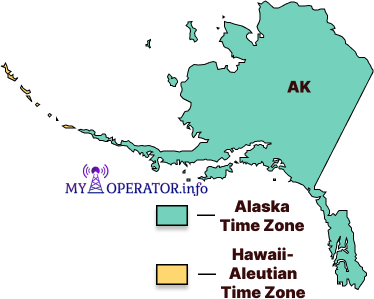 As you can see, indeed, the territory of the state completely covers this time zone. Location of other time zones in the USA is shown on the US time zones map.

The current time in there is the same as in Anchorage, AK, which is the biggest city of the Alaskan Time Zone. You can check it on the clock below:

As in most states of the USA the daylight saving time (Alaska Daylight Time or AKDT) is observed there. Rest of the year the standard time is used.