Daylight Saving Time in USA | When do we change the clocks?

Twice a year, Americans, as well as residents of some other countries of the world, move the clock back and forth. These simple manipulations are called Daylight Saving Time (DST).

Daylight saving time is the term which is mostly used in the United States, Canada and Australia. It is called summer time in European and some other countries.

When do we change clocks for daylight savings time?

In those states, where the daylight saving time is observed, time changes happen two times a year:

Due to the fact that in the United States there are several time zones, accordingly, people from different states and cities change clock for daylight savings not at the same time. That’s why time zones changes from ST to DST are happening a little differently: somewhere earlier and somewhere later.

Are we gaining or losing an hour?

The clock hands move back or forward depending on the time of year. As the main purpose of daylight saving times is more efficient use of daylight: 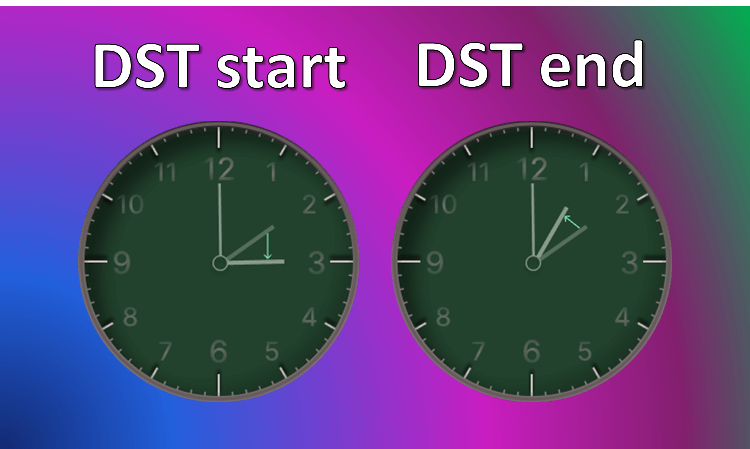 As Americans change time for clocks to move an hour of daylight from the morning to the evening during the summer months, it turns out that in fact we lose one hour in March and gain it in November.

The end of daylight saving time is scheduled for November 6, 2022.

What’s the difference between daylight savings time and standard time?

When is the change of time happening?

Night time for starting or ending of daylight saving is not chosen by chance. It seems to be the most practical decision for disruption minimization as people are mostly at home.

Mechanical clocks need to be reset on your own in the night from Saturday to Sunday or in the morning after you wake up.

Are we in DST?

To know if you are currently on DST or standard time, you should check the calendar. The phase from the second Sunday of the March to the first Sunday of the November is included in daylight savings time. The rest of the year the standard time is used. The only exceptions are those cities and states where DST is not observed at all.

What states are getting rid of daylight savings time?

It is unlikely that in the near future one of those who already use DST will refuse it. Instead of it daylight saving time is going to be permanent from 2023, what will cancel annual ritual of Americans changing their clocks back or forth by an hour. The U.S. Senate has voted unanimously to approve this decision.

What states don’t do daylight savings?

The states that don’t observe DST are marked in red on the map.

They are the only two states which don’t recognize daylight savings in the United States. Previously, this list also included the state of Indiana, but in 2006 daylight saving time began to be observed there.

Although Arizona is in Mountain time zone, in some cities, including Phoenix, the time may differ from the general time, used in this time zone (due to refusal of the state (except for northeast) to use daylight saving time).

In addition to them there are several overseas territories that do not observe daylight saving time: American Samoa, Guam, Northern Mariana Islands, Puerto Rico, and the U.S. Virgin Islands are among them.