What is CAP in Italy? All about Italian postal code

For sending a letter or parcel to Italy, you may need a special postal code. In Italy’s version such postal codes or ZIP codes are called CAP. What is its feature, we will tell in this article.

Contents
1) What does Italian CAP mean?
1.1) How many digits are in CAP?
2) CAP structure
3) Italian postcodes by provinces

What does Italian CAP mean?

CAP is the current postal code system that operates in Italy. Routing information in specific format is provided for all the Italian cities and towns. In total there are 28 CAPs which belong to Italian city centres.

How many digits are in CAP? 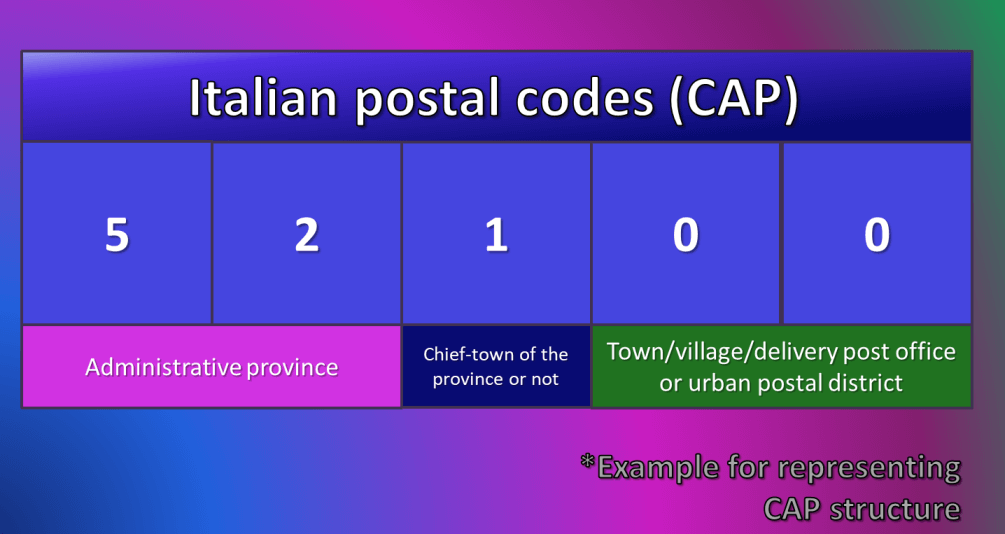 Each postal code in Italy consists of such numbers:

CAP of main Italian cities such as Rome, Milan, Venice and others contains two last digits which mean the urban postal district. It is often written as 00 or 70 in minor provincial chief-towns.

Below you can see what digit the postal codes in Italy start with.

Previous Post
What is a ZIP code? Structure, examples and meanings
Next Post
What is CEP in Brazil? All about Brazilian ZIP codes