What is Eircode in Ireland? All about Irish postcodes

Although Ireland did not have national postcode system for a long time, in 2014 there was released an Eircode — system that is fundamentally different from other countries.

Contents
1) What does Irish Eircode mean?
2) How many digits are in Eircode?
3) Eircode structure

Let’s see what the main features this system has.

What does Irish Eircode mean?

The name “Eircode” comes from Irish “éirchód” and can’t be translated. The key feature of this system is that it incorporates the existing numbered Dublin postal districts as piece of the routing key.

Unlike US ZIP codes or UK postcodes, which define clusters or groups of addresses, Eircode provide the opportunity to identify an individual address and show its exact location. That is why Ireland has become the first country in the world which has unique postcodes for each address.

How many digits are in Eircode?

An Eircode looks like 7-digit code which contains both numbers and letters. Due to its format each Eircode is divided into two parts:

There must be a space between Eircode parts. The example of correct Eircode format: A45 F4E7. 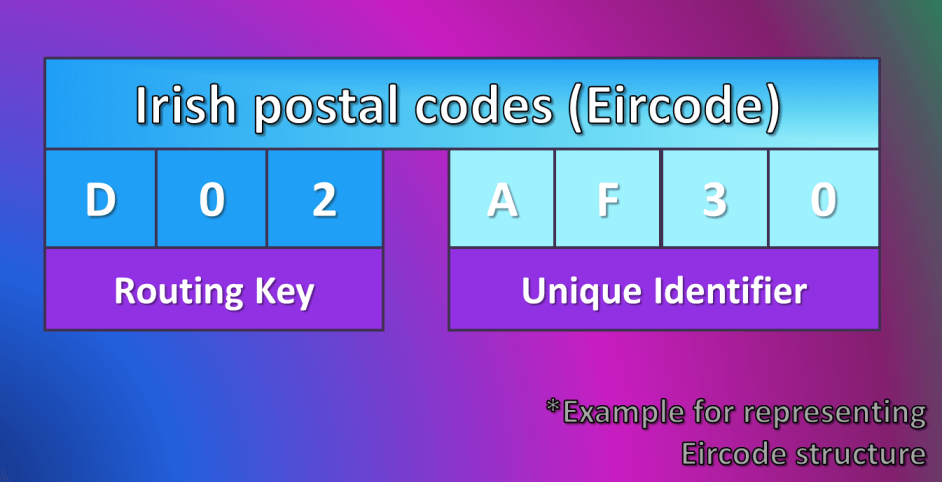 “Routing Key” is the first part of Eircode, which is considered to be a basic unit of the postal delivery system in Ireland. Now it is required part of all postal addresses in this country. Each of them contains on average 15,000 addresses, what is helpful in mail sorting to identify exact area.

“Unique Identifier” is the second part of Eircode which identifies each individual address.

Previous Post
What is CEP in Brazil? All about Brazilian ZIP codes
Next Post
The statuses of ZIP codes by city name | Status definitions