What is a FIPS number? Know more about FIPS codes

For identifying geographic areas in USA there are a lot of different instruments, including FIPS numbers. In this article you will know what it is.

What does FIPS code mean?

FIPS is the abbreviation of the term “Federal Information Processing System” (FIPS), which used to designate a specific county or state. FIPS codes look like the combinations of numbers, which match with exact geographic areas.

By the number of digits in FIPS codes you can determine the level of geography: 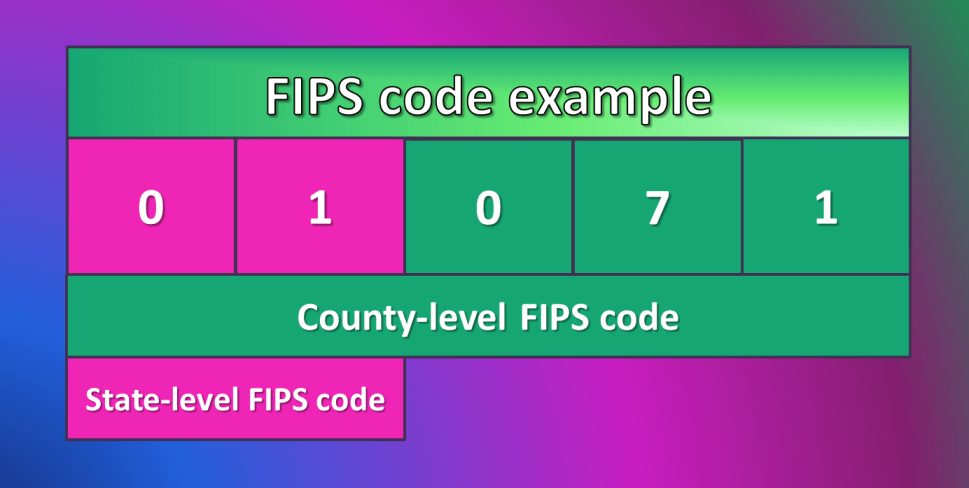 FIPS county codes combination always starts with 2 digits of FIPS state codes (of the state to which the county belongs). Example: county FIPS code of Jackson County is 01071. It means that it is situated in the state with FIPS code 01 i.e in Alabama.

FIPS code is a term that is used in a broader sense than ZIP Codes have. Each county has only one own FIPS code, while containing dozens of ZIP Codes.

By the way, there is a big difference in classification principle:

All FIPS codes by state

Unlike state FIPS codes the base of FIPS codes for counties is updated on a regular basis. That’s why we recommend you to look for this information on government web resources if you need it.

Previous Post
Primary types of ZIP codes | Statuses and meanings
Next Post
What is an area code in US phone numbers?